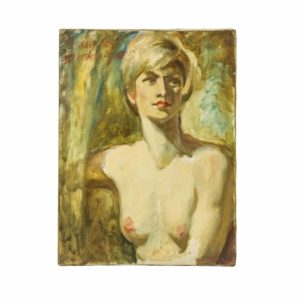 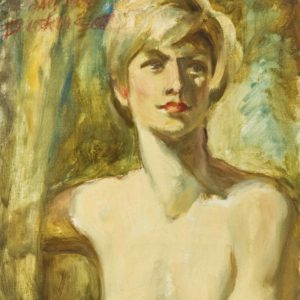 $395.00
Original oil on canvas by Ohio-based artist Robert Martin (1918-1998) depicts a seated, nude female figure against a chartreuse background. A painter who was gifted with modern sensibility, Martin’s loose, washy brushwork creates an image that still appeals to the contemporary collector. Likely a study for another, larger work, this painting is mounted on the original stretcher bars and is unsigned by Martin. About the Artist: Robert Martin (1918-1998) was born in Cleveland, Ohio and raised by his grandmother. His grandmother, having grown up in the Victorian Era, is responsible for the period’s influence on his early works. Martin studied the painting from books of the masters, old and new. He worked from life, enjoying the process and interaction that was created. In the 1980s, he began working from photographs with his series of Victorian Village scenes. An ever-learning student, his work has distinctly different decades reflecting his progress and interests. Persisting was his use of oil on canvas, despite his training in other mediums. His poetic soul was evident in his philosophy as an artist. This painting is amongst hundreds of pieces of art that are available at our location in Grandview! Come in today and see the full collection.
Add to wishlist
Add to cart
Quick view 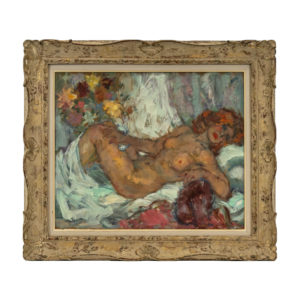 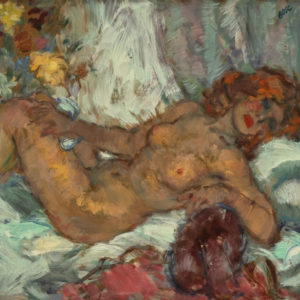 Luxurious oil painting depicts a reclining female nude in a style reminiscent of post-Impressionism. Embellished by florals, the female nude has been painted with warm, fleshy tones and treated with energetic brushwork. The surrounding background has been constructed of sheets that envelope the figure and have been fashioned in vitalic pinks, blues, and greens. The subtle treatment of the subject’s face is rendered carefully and with attention to detail. This is a painting that exudes the boldness of modernist painting and is ideal for serious collectors. Framed in a distressed white, this piece has been signed ‘Bosc’ in the upper right hand corner of the piece.

This painting is amongst hundreds of pieces of art that are available at our location in Grandview! Come in today and see the full collection.

Shopping cart
close
Start typing to see products you are looking for.