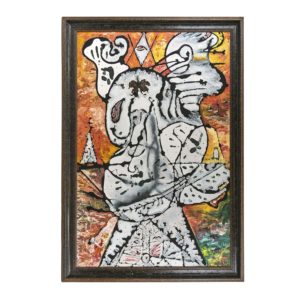 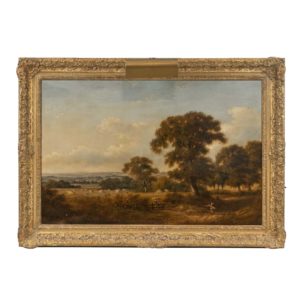 Antique original oil on board painting is a portrait of  a schoolboy, leaning on his desk, smiling as he holds a pen against paper. The young man’s dark coat and dark backdrop pull the focus to his bright, pleasant face. The medium of oil on board gives a rich look to this portrait. Signed S. Reynolds in corner, framed in gold.

This painting is amongst hundreds of pieces of art that are available at our showroom in Grandview! Come in today and see the full collection. 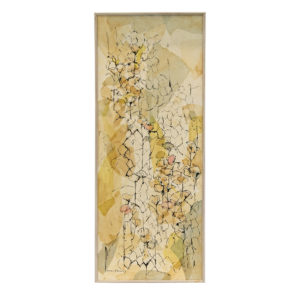 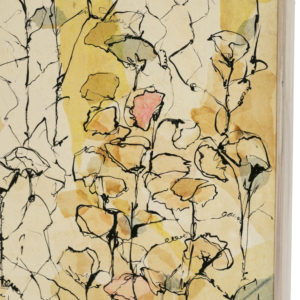 $598.00
This tall mixed media painting on board by American artist Helen J. Sherry (1927-2011) depicts yellow florals against a hodge-podge background of collaged papers. A true example of mid-century modern style, this vitalic painting offers a textural, eclectic piece of art to the home. Housed in a brown frame, this original mixed media is signed by the artist in the lower right hand corner of the painting. This painting is amongst hundreds of pieces of art that are available at our location in Grandview! Come in today and see the full collection.
Add to wishlist
Add to cart
Quick view 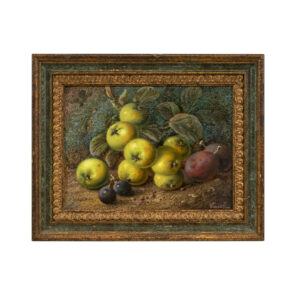 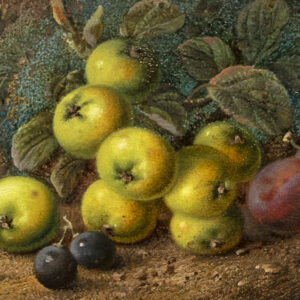 $495.00
Small original antique oil painting by listed English artist Vincent Clare (1855-1930) depicts a lavish still life with fruits against a vibrant background for verdure and florals. Lush peaches and grapes are rendered with soft brushstrokes, creating an image good enough to eat. Housed in a mossy toned frame with bronze accents, this original painting has been signed by Clare in the lower right hand corner of the canvas.  This painting is amongst hundreds of pieces of art that are available at our location in Grandview! Come in today and see the full collection.
Add to wishlist
Add to cart
Quick view 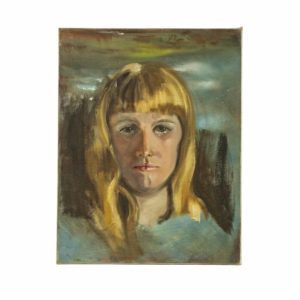 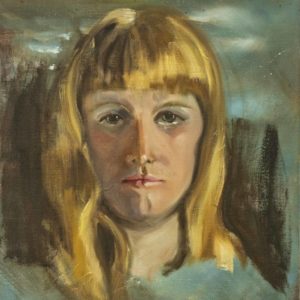 $295.00
Original oil on canvas by Ohio-based artist Kay Ackerman-Martin depicts the portrait of a blonde haired woman in a blue shirt against a dramatic background of teal and earthy tones. Ackerman-Martin intermingles thin, translucent washes with opaque brushwork to create an image arrested in time with beautiful, modern sensibility. Mounted on the original stretcher bars, this painting is unsigned by Ackerman-Martin. This painting is amongst hundreds of pieces of art that are available at our location in Grandview! Come in today and see the full collection.
Add to wishlist
Add to cart
Quick view 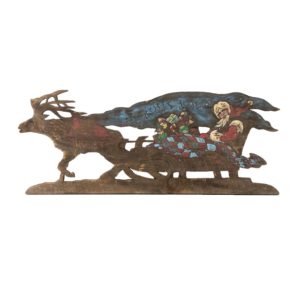 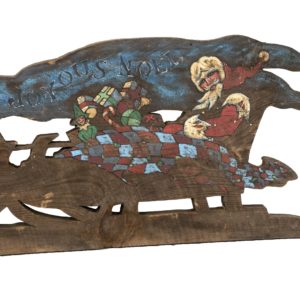 $595.00
If you’re looking for unique, vintage, rustic, or whimsical Christmas decor, this original piece by Ohio artist Robert Martin (1918-1998) will be perfect for your space! This handcrafted piece is cut out from primitive barn wood and painted by the artist. A reindeer pulls Santa’s sleigh, overflowing with gifts as Joyous Noel is emblazoned in blue against the sky.  Similar pieces by artist available, sold separately.  About the Artist: Robert Martin (1918-1998) was born in Cleveland, Ohio and raised by his grandmother. His grandmother, having grown up in the Victorian Era, is responsible for the period's influence on his early works. Martin studied the painting from books of the masters, old and new. He worked from life, enjoying the process and interaction that was created. In the 1980s, he began working from photographs with his series of Victorian Village scenes. An ever-learning student, his work has distinctly different decades reflecting his progress and interests. Persisting was his use of oil on canvas, despite his training in other mediums. His poetic soul was evident in his philosophy as an artist.  This piece is amongst hundreds of pieces of art that are available at our showroom in Grandview! Come in today and see the full collection.
Add to wishlist
Add to cart
Quick view
Sale 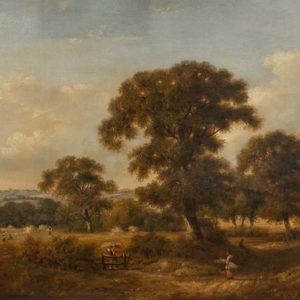 $2,750.00
Fabulously antique, “Harvest Landscape” by late 18th century painter William Williams depicts a quaint pastoral scene under a blue sky with puffed white clouds. Small figures can be seen carrying bundles of wheat. Muted colors and classical execution evokes charming tranquility. The antique frame is carved with a golden finish, and includes a brass light. Signed in corner. Alchester, Warwickshire noted on reverse. About the Artist: Taken from the insurance appraisal (on file): William Williams was an English subject, landscape, and portrait artist who practiced in London and Norwich in the latter half of the 18th Century. The Society of Arts awarded him a premium in 1758 and he exhibited occasionally at the Royal Academy between 1770 and 1792. His “Marriage” and “Gallantry” were engraved by Jukes, and several of his Shakespearian subjects by Valentine Green.  This painting is amongst hundreds of pieces of art that are available at our showroom in Grandview! Come in today and see the full collection.
Add to wishlist
Add to cart
Quick view
SaleSold out 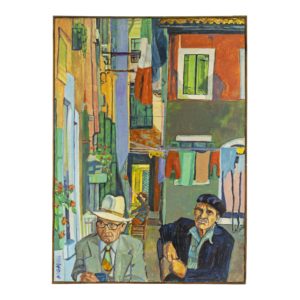 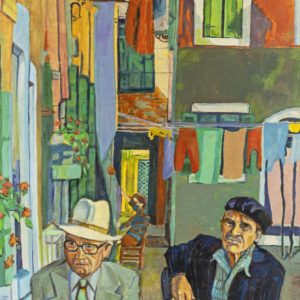 Signed M.G. MILLER Oil on Board Painting of Two Men on the Streets of Italy

SOLD
Original oil painting on board depicts a modernist rendition of two older male figures seated against a vibrant backdrop of an Italian streetscape. Towering, colorful buildings create a tall composition, allowing the viewer to meander through details before being led back to the suited figures. Housed in a simple wood support frame, this painting is signed “M. G. Miller” by the unknown artist on the left hand side of the board.   This painting is amongst hundreds of pieces of art that are available at our location in Grandview! Come in today and see the full collection.
Add to wishlist
Read more
Quick view
Sale 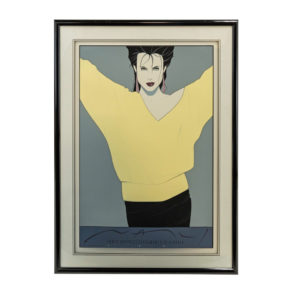 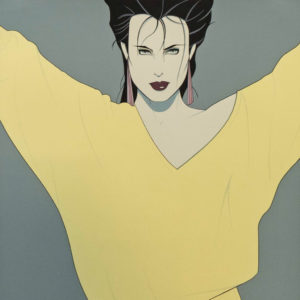 $625.50
Silkscreen by renowned artist and illustrator Patrick Nagel (1945-1984) depicts a female figure against a stone blue background. The figure casts a sultry expression and is dressed in an oversized, pale yellow sweater with arms raised to sensually frame the image. A widely collected artist, Nagel’s popular illustrations emphasize the female form in a distinctive, immediately recognizable style descended from Art Deco and Pop art. Posthumously released for Tower Graphics of Sacramento, California, this commemorative silkscreen is matted and housed in a sleek, contemporary frame and is unsigned. About the Artist: Patrick Nagel was born November 25, 1945 in Dayton, Ohio, but was raised most of his life in the Los Angeles area. After serving in the United States Army with the 101st Airborne in Vietnam, Nagel attended the Chouinard Art Institute in Los Angeles in 1969, and in that same year he received his Bachelor of Fine Arts degree from California State University, Fullerton. Beginning in 1971, Nagel worked as a graphic designer for ABC Television before partaking in freelance work for companies and magazines such as IBM, Rolling Stone, and Universal Studios. Likewise, Nagel produced album covers for recording artists, most notably for Duran Duran’s 1982 hit album, Rio. Nagel contributed to Playboy Magazine from August 1975 to July 1984, with one of his paintings being published in every issue between that time period, roughly totaling 285 pieces. Nagel died of an undisclosed heart defect in 1984, at the young age of 38. His already popular work exploded throughout the 1980s and flooded the market to make Nagel a quintessential American artist still today. This set of prints is amongst hundreds of pieces of art that are available at our location in Grandview! Come in today and see the full collection.
Add to wishlist
Add to cart
Quick view 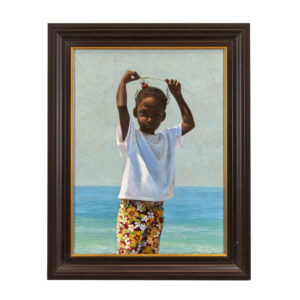 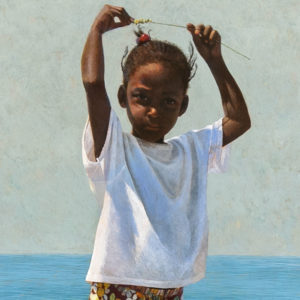 $2,200.00
Original painting by American artist Jerry Rose (1948-) depicts a portrait of a young girl, the clear, blue seas of the Bahamas occupying the background. Known more for his landscapes, Rose crafts a well-rendered image out of delicate, precise brush strokes and masterful color selection. Housed in a charming brunette and gold frame and mounted behind glass, this original painting is signed in the lower right hand corner by the artist.  This painting is amongst hundreds of pieces of art that are available at our location in Grandview! Come in today and see the full collection.
Add to wishlist
Add to cart
Quick view
Shopping cart
close
Start typing to see products you are looking for.