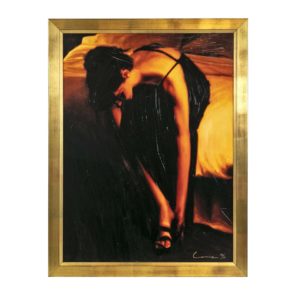 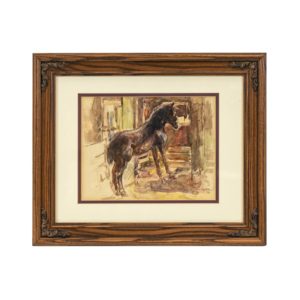 An original production drawing of Pluto the Dog by the animators at the Walt Disney Studios. This hand drawing production still would have been used as a basis to create one of the thousands of animation cels utilized to make up each individual animated cartoon. Framed and matted in a dark brown.

This production drawing is amongst hundreds of pieces of art that are available at our location in Grandview! Come in today and see the full collection. 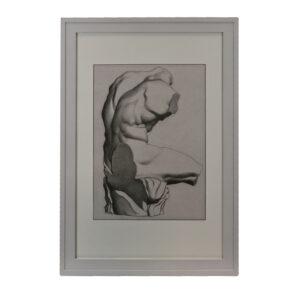 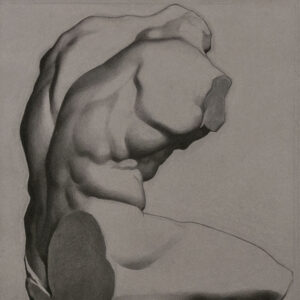 $895.00
Original charcoal drawing on paper by Columbus, Ohio artist Miriam Baranov depicts a study of the Belvedere Torso, a fragmentary male nude statue dated from 1430s Rome. Rendered onto gray paper to highlight the shadows of the drawing, Baranov crafts a masterful rendition of the sculpture in the style of the French academics of the late 1800’s. Housed in a matching, neutral gray frame. About the Artist: Miriam Baranov is a realism painter who currently resides in Columbus, Ohio. With passions in both art and mathematics, Baranov has exquisite precision in her realistic figurative portraiture. She creates the entire piece as both engineer and artist, starting with stretching the canvas for the portrait, and finishing with high-quality custom framing.  She currently runs a business of custom portraits out of her Columbus, Ohio studio.   This drawing is amongst hundreds of pieces of art that are available at our location in Grandview! Come in today and see the full collection.
Add to wishlist
Add to cart
Quick view
SaleSold out 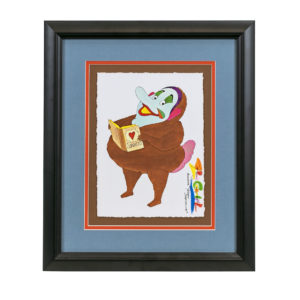 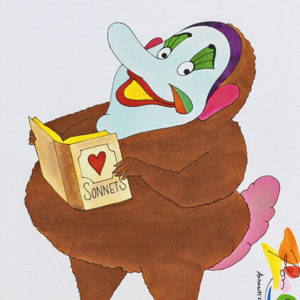 SOLD
Giclée print by Australian animator Ron Campbell depicts Jeremy Hillary Boob, Ph.D. a prominent character from the 1968 Beatles animated film, Yellow Submarine. Credited as one of central animators responsible for the success of Yellow Submarine, Campbell went on to work for companies such as Disney and Klasky-Csupo at Nickelodeon before retiring to create pop art works based on films he had been involved with. This cherished piece of animation and music history is housed in a standard black frame, matted in “Blue Meanie'' blue and is signed by Campbell on the right hand side of the print. Copy of certificate of authenticity on file. This giclée print is amongst hundreds of pieces of art that are available at our location in Grandview! Come in today and see the full collection.
Add to wishlist
Read more
Quick view
Sold out 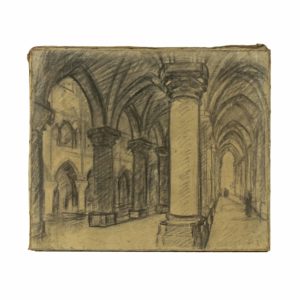 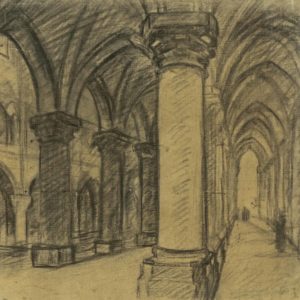 SOLD
Original charcoal sketch on canvas by Ohio-based artist Robert Martin (1918-1998) depicts the interior of a French cathedral. Rendered in a loose, mark-making technique, this drawing is likely a study for another, larger work. Mounted on the original stretcher bars, the canvas is unsigned by Martin. About the Artist: Robert Martin (1918-1998) was born in Cleveland, Ohio and raised by his grandmother. His grandmother, having grown up in the Victorian Era, is responsible for the period’s influence on his early works. Martin studied the painting from books of the masters, old and new. He worked from life, enjoying the process and interaction that was created. In the 1980s, he began working from photographs with his series of Victorian Village scenes. An ever-learning student, his work has distinctly different decades reflecting his progress and interests. Persisting was his use of oil on canvas, despite his training in other mediums. His poetic soul was evident in his philosophy as an artist. This painting is amongst hundreds of pieces of art that are available at our location in Grandview! Come in today and see the full collection.
Add to wishlist
Read more
Quick view
SaleSold out 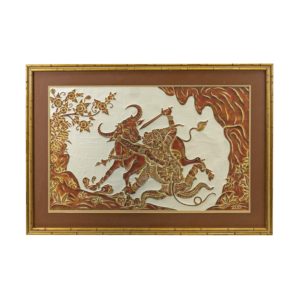 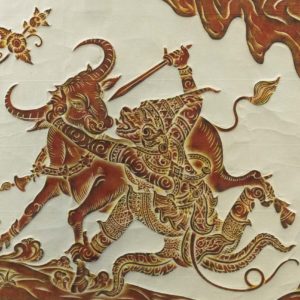 SOLD
This original drawing is crafted from a rubbing off of a Thai religious temple and depicts a fearsome battle between a monkey king and an ox. Serving as an authentic piece of east Asian art, this magnanimous drawing is finished in beautiful tones of reds and golds. Housed in a gold frame with bamboo accents, this original drawing is unsigned by the unknown artist. This drawing is amongst hundreds of pieces of art that are available at our location in Grandview! Come in today and see the full collection.
Add to wishlist
Read more
Quick view
Shopping cart
close
Start typing to see products you are looking for.