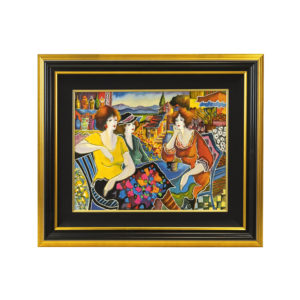 Titled “Morning Rendezvous”, this lithoserigraph by Croatian artist Zvonimir Mihanović (1946-) depicts nesting boats against a tranquil sea. Known for his hyper-realistic representations of the Dalmatian coast off the Adriatic Sea, Mihanović crafts an image of peacefulness and serenity using common seascape painting language. Housed in a sculpted gold frame, this serigraph is signed and numbered by the artist at the bottom of the print.

This lithoserigraph is amongst hundreds of pieces of art that are available at our location in Grandview! Come in today and see the full collection. 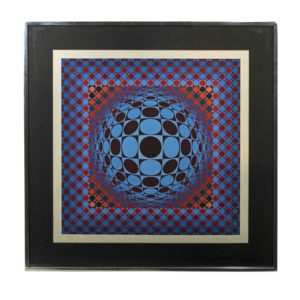 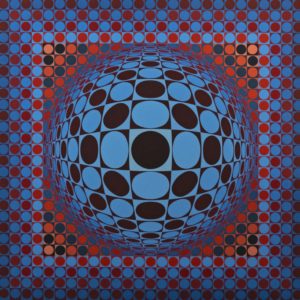 $1,495.00
Serigraph by renowned leader of the Op art movement, Victor Vasarely (1906-1997), depicts an illusory field of blue and red circles resolving in a spherical design that occupies the central focus of the print. Widely accepted as the grandfather of Op art, Vasarely utilized precise color and geometric compositions to create illusions of compelling spatial depth. Housed in a silver frame with austere black matting, this serigraph is signed and numbered by Vasarely at the bottom of the print, making for a truly rare addition to the home. About the Artist: Victor Vasarely was born in Pécs on April 9, 1906 and grew up in Pöstény and Budapest. Originally taking up medical studies, Vasarely abandoned medicine in 1927 to learn academic painting, studying at Sándor Bortnyik's private art school, Műhely (or "Workshop"), then widely recognized as Budapest's center of Bauhaus studies. After settling in Paris in 1930, Vasarely worked as a graphic artist before turning to creating art and sculptures using optical illusions. Developing his style of geometric abstract art over the next three decades, Vasarely widely became known as the founder and leader of the so-called “Op art” movement, with numerous museums and galleries collecting his work. After a long and successful career, Vasarely died in 1997, at the age of 90. This lithograph is amongst hundreds of pieces of art that are available at our location in Grandview! Come in today and see the full collection.
Add to wishlist
Add to cart
Quick view
Sale 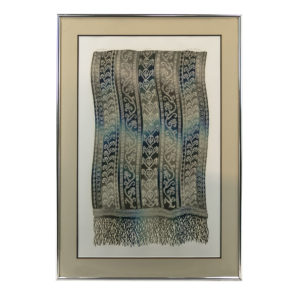 $198.00
Signed and numbered #94/250, a lithographic print by Jules Roch, the pseudonym of John Martineau(1948-1995). Titled Interlace, this print depicts a scrolling tapestry of various patterns, enhanced by subtle gradients. This lithograph is amongst hundreds of pieces of art that are available at our location in Grandview! Come in today and see the full collection.
Add to wishlist
Add to cart
Quick view
SaleSold out 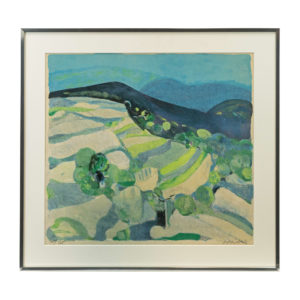 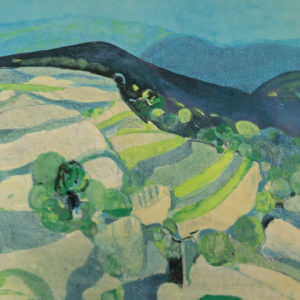 SOLD
Original lithograph by French painter Roger Mühl (1929-2008) depicts a postmodern landscape in gentle tones of green and blue. Washy treatments of ink complement the cream tone of the paper, creating a sense of atmosphere to Mühl’s subtle composition; a stark contrast to Mühl’s more impasto oil paintings. Housed in a sleek, silver frame, this lithograph is signed and numbered by the artist at the bottom of the print.  This lithograph is amongst hundreds of pieces of art that are available at our location in Grandview! Come in today and see the full collection.
Add to wishlist
Read more
Quick view
SaleSold out 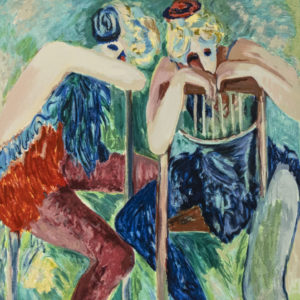 SOLD
Original serigraph by Columbus-native Barbara Wood depicts two seated, harlequin female figures against an energetic backdrop of washy greens, blues, and chartreuse. Renowned for her figural work, Wood crafts an image of melancholy to the figures, having given their last performance in a nod to the image’s title. Housed in a black and gold frame with woven details, this serigraph has been signed and numbered by the artist at the bottom of the print. This serigraph is amongst hundreds of pieces of art that are available at our location in Grandview! Come in today and see the full collection.
Add to wishlist
Read more
Quick view 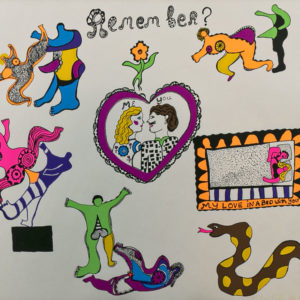 $2,900.00
Serigraph by French-American artist Niki de Saint Phalle (1930-2002) is titled “Remember?” and depicts various moments of intimacy with a couple paired with whimsical colorful figures. Noted for her experimental style of making art that incorporated whimsical, light-hearted elements, Saint Phalle presents an image of charged eroticism meant to explore the passions she held for her lover. Housed in a modest silver frame, this serigraph is signed by the artist at the right hand corner of the print in faded ink. About the Artist: Catherine Marie-Agnès Fal de Saint Phalle was born in 1930 near Paris to a French father and an American mother as the second of five children. She spent most of her childhood in New York City, and summers in Connecticut or Long Island, though she frequently returned to France to visit relatives, becoming fluent in both French and English. Working as a fashion model in her late teens, Saint Phalle appeared on the cover of Life Magazine and in the pages of Elle and Harper’s Bazaar, and eloped with Henry Matthews, an author and childhood friend, at the age of 18. While Matthews studied music at Harvard University, Saint Phalle began to explore painting, being encouraged to paint as a form of therapy. At the end of the 1950s, Saint Phalle and her husband moved back to Paris. In 1960, however, the couple separated and Saint Phalle moved to a new apartment, established a studio, and met artist Jean Tinguely, with whom she would collaborate artistically. Within a year, they had moved in together and begun a romantic relationship. Saint Phalle became part of the Nouveau Réalisme movement along with Tinguely, Yves Klein, Arman and others, being the only woman in the group. Her most famous and prolific series of works, the Nanas, were begun in the mid-1960s and were inspired by a friend's pregnancy, her reflections on archetypal feminine forms, and the vexed positions that women occupy in modern, patriarchal societies. 'Nanas,' a French slang word roughly equivalent to 'broads,' is a title that encapsulates the theme of the everywoman as well as the casual denigration that closely accompanies the rhetorical grouping of women as a social category. Saint Phalle became one of the first artists to get involved with the AIDS crisis, with the 1980s also serving as the the most prolific period in the Nanas series. Working at her art until the very end, Saint Phalle died in La Jolla, California in May of 2002 and has been immortalized as an artist that has had a significant effect on the development of conceptual art and feminism. This serigraph is amongst hundreds of pieces of art that are available at our location in Grandview! Come in today and see the full collection.
Add to wishlist
Add to cart
Quick view
Sale

$556.00
Limited edition print by renowned American maritime painter William Gordon Muller (1937-) depicts a harbor scene in New York at the turn of the 18th century. Printed onto woven paper, the full moon casts soft light over the busy harbor, blues and warm tones intermingling to create nostalgic beauty. Matted and framed, this offset lithograph is signed and numbered by the artist along the bottom of the print. This limited edition print is amongst hundreds of pieces of art that are available at our location in Grandview! Come in today and see the full collection.
Add to wishlist
Add to cart
Quick view
Sale 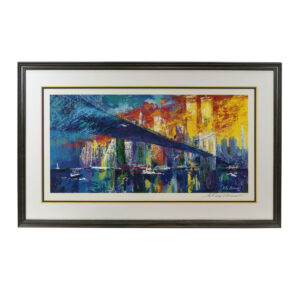 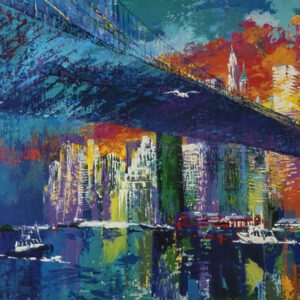 $1,000.00
Original offset lithograph by famed American artist Leroy Neiman (1921-2012) depicts the Brooklyn Bridge with vivid and electric shades of blue that transmute to warm hues of yellow, orange, and red. This piece is based off of a painting that has been originally created through thick palette knife work and departs from Neiman’s typical subject matter of sporting related imagery. A rare find, this lithograph has been hand signed by hand signed by Neiman and framed in a sleek sable. About the Artist: LeRoy Neiman (1921-2012) was an American artist who used bright colors with expressionist style to create iconic images, primarily of musicians, athletes, and sporting events. Neiman studied at the School of the Art Institute of Chicago after serving in World War II. He then worked as a part of the Art Institute staff for ten years. While working as a freelance fashion illustrator, he met Hugh Hefner and became a frequent contributor to Playboy Magazine. He traveled the world and cataloged his journeys with paintings of leisurely life, athletic competitions, and social activities. Jazz, casinos, and nightlife along with historical athletic happenings such as the Olympics, the World Series, the Super Bowl, and the Kentucky Derby were all at Neiman’s fingertips. He was very commercially successful, and became an exceedingly generous philanthropist, giving back to communities and interests that he participated in himself. This offset lithograph is amongst hundreds of pieces of art that are available at our location in Grandview! Come in today and see the full collection.
Add to wishlist
Add to cart
Quick view 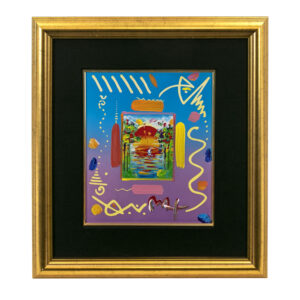 $4,000.00
Original mixed media collage by renowned German-American Pop artist Peter Max (1937-) depicts a colorful rendering of a sunset bordered by abstract forms and gestural brushstrokes. Max’s signature psychedelic style has remained popular with collectors since he first began exhibiting in the early 1960’s. Crafted from painted acrylic on lithograph and framed in gold, this piece of fine art is signed by Max on the lower right hand side of the print. This collage is amongst hundreds of pieces of art that are available at our location in Grandview! Come in today and see the full collection.
Add to wishlist
Add to cart
Quick view
Shopping cart
close
Start typing to see products you are looking for.